Mass Incarceration: An Emergency We Must Address- Part 1

Editors’ Note: This 2 part series highlights work being done by a FemInEM on mass incarceration.

Mass incarceration recently came into the political spotlight as both progressive and conservative politicians agree that imprisoning such a high number of people is unsustainable1. Celebrities like Serena Williams and John Legend have also taken up the cause, calling attention to the extreme racial inequities in the prison population. 2,3  The financial impact of mass incarceration policies is profound. In fact, Bruce Western, a Harvard sociologist found that a 66% increase in the state prison population decreased the rate of serious crime by only 2-5%, but at a cost of $53 billion. 4 However, the impact on the rights and opportunities of those imprisoned and their communities takes an even more devastating and disproportiate toll given that those who face the consequences of incarceration are more often black individuals (and to a lesser extent other racial and ethnic minorities) and their communities.  In part one of this two-part discussion of mass incarceration, we will examine the historical factors that led to mass incarceration and the lifelong impact that imprisonment has on individuals and their communities.

How did mass incarceration come to be?

The policies that led to mass incarceration were instituted in the early 1970s as a strategy to appeal to “law and order” voters, middle and lower class whites.4,5 The great migration of blacks to northern cities and the dissolution of Jim Crow policies in the south led politicians, particularly the Nixon administration to appeal to white voters by increasing penalties for drugs and declaring war against “criminal elements which increasingly threaten our cities, our homes, and our lives.”4 Nixon stated in 1968, “Doubling the conviction rate in this country would do far more to cure crime in America than quadrupling the funds for [the] War on Poverty.” 4 As Ta Nehisi Coates stated,  “He didn’t need to name the threat. A centuries-long legacy of equating blacks with criminals and moral degenerates did the work for him.” 4

In the 1980s, mandatory minimums further increased the prison population. There was bipartisan support for these sentences as conservatives sought to prevent judges from being “soft on crime” and liberals believed that mandatory sentences would prevent racial bias from affecting sentencing. Judges no longer controlled the length of sentences, but prosecutors did because of their ability to choose which crimes to charge. Overall, this policy led to fewer alternatives to prison like parole and an increase in jail or prison time. 4,5

Democrats and Republicans grappled to prove who was tougher on crime in the 1990s. The Clinton administration was key in passing a bill that provided $10 billion in funding for new prisons, $6.1 billion for fighting crime, and 100,000 new police officers. During the 1990s, “truth in sentencing” laws also gained a foothold. These policies required offenders to serve a minimum percentage of their sentence (usually 85%) before being eligible for parole. 4

Why does spending time in prison take a life long toll?

As noted above, a felony conviction or time in prison, significantly limit life opportunities with respect to employment, education, and housing. 5 They also limit one’s ability to change circumstances through the vote or change circumstances for others through jury service.5 Even if you are able to overcome these challenges, life expectancy decreases two years for every year spent behind bars.6 Efforts to improve the health of black communities are often impeded by mass incarceration as well. Since those in prison have reasonably been excluded from participation in research because of concerns for coercion, large portions of the population have been excluded from this research, further limiting understanding of health needs and effective interventions in communities impacted by mass incarceration.7 Children of incarcerated parents have increased problems in school, behavioral problems, and depression symptoms, especially in boys. Because of increased challenges in school and increased behavior problems, children of incarcerated parents are at higher risk of getting caught up in the criminal justice system themselves, meaning that mass incarceration has a multi-generational impact.8

How does mass incarceration impact communities?

By the 1990s, crime levels had decreased, but the prison population kept climbing. Violent crime fell throughout the world, suggesting that policy change in the US was not to credit for this trend. In fact, between 1960 and 1990, crime rates in the US, Germany and Finland were very similar. However, the US incarceration rate increased by 400%, in Finland, the rate decreased by 60%, and in Germany it stayed the same. 4,5 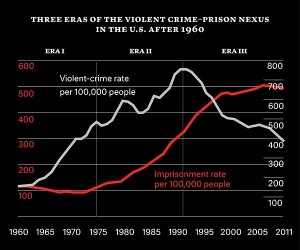 Source: The Atlantic: The Black Family in the Age of Mass Incarceration

This led to shocking changes in minority communities, particularly black communities. Between 1983 and 1997, African Americans admitted to prison for drug offenses increased 26 times. During the same time period, whites had a 7-fold increase.5 In 2001, there were twice as many blacks in state prisons as whites. This is despite the fact that blacks and whites abuse drugs at similar rates and that drug users tend to buy drugs from dealers of their own race. For black men who dropped out of high school, prison has almost become a right of passage. In 1979, black men under age 35 who dropped out of high school had a 15% chance of going to prison. In 2009, that had increased to a 68% chance. In fact, one in nine black children (1.2 million), have a parent in prison.6

This disruption of families has a profound effect. More than half of fathers in state prisons are the primary breadwinner. Absence of a father due to imprisonment also results in behavioral issues, particularly for boys, which can result in prison time becoming an “inherited trait” in families. 6 Beyond these strains on family dynamics, prison time prevents formerly incarcerated people from using or feeding their families with food stamps. Similarly, formerly incarcerated people are excluded from public housing.5 Many employers use a criminal record as a measure of trustworthiness, regardless of whether a criminal record impacts an individual’s ability to perform the job.4 Most felons are not allowed to vote. The end result of these restrictions are a method of social control that is quite similar to Jim Crow as it restricts where incarcerated people can live, work, or educate themselves, and keeps them from being able to vote or serve on juries. 5

Many feel that those who are in jail or prison deserve these limitations as punishment for their crimes. However, these penalties disproportionately impact African American, Native American, and Latino communities, in spite of the fact that rates of drug dealing and drug use are similar across races. In part two, we will examine why there are racial and ethnic disparities in incarceration rates and discuss possible alternatives to incarceration.