White or Blue: Does the Color of your Collar Matter?

In a recent Forbes article Georgene Huang, CEO of the women in the workplace website Fairygodboss, discussed the workplace experiences of “blue collar” and “white collar” workers. She was inspired to write this article by after the Wall Street Journal published a report concluding that women in white-collar, high-paying professions experienced a larger gender pay gap than women in blue-collar professions.

The article caught our attention as well since they highlighted that women physicians and surgeons made 64% of men. This was the LARGEST gender pay gap of all the jobs studied.

Her article Who Has it Better at Work: Blue-Collar or White Collar Women? You Might be Surprised…addressed a series of subsequent questions. If white collar women had a larger pay gap disadvantage at work, were they also less happy?

Fairygodboss conducted a casual straw poll among their newsletter readers asking them which group of women they thought faced more gender inequality at work. As you can see, most women gender inequality was either the same at both types of jobs, or more common at a blue collar job. 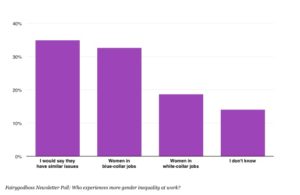 They asked questions about sexual harassment at work and work life balance as well. Answers were the same for both groups, almost identical, in fact. 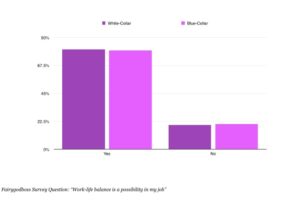 However, differences were noted once salary and promotion became the topics. Women in white collar professions felt they were more likely to receive equal pay. 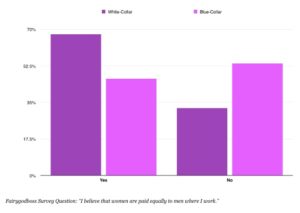 But, they were less likely to believe they had an equal shot at promotion. 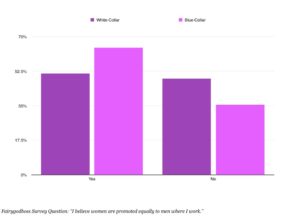 Huang didn’t propose reasons for the differences in responses across jobs, she just simply set out to ask some new questions. She did, however, discover some interesting information in the last section of the questionnaire. In all fairness, what Huang learned was probably most obvious to us FemInEMs all along.

Huang found three examples of professions (in both female and male-dominated industries) where pumping breast-milk at work presented a serious challenge.

Teachers — who are largely female — often complained in their Fairygodboss reviews about the difficulty in finding a clean, decent place to pump at schools across America. Class schedules don’t align well with a pumping schedule and it’s difficult to find space that isn’t a bathroom at school, which is also clean and private.

Huang referred to another recent Fairygodboss piece on flight attendants and pilots. It seems that women who are near their estimated due date are not allowed to fly without a doctor’s note and similarly, female pilots are required to take unpaid time off before their babies arrive.

Moreover, she said some airlines doo not give new mothers a designated breastfeeding location on the aircraft or at the airport. Erin Zielinski, a pilot suing Frontier airlines, told CNN “I love my job as a pilot so much, except for this issue. We don’t want future moms to have to go through this. We want a better policy for everyone going forward. There are more and more female pilots being hired…We don’t want anyone to have to choose between flying and breastfeeding.

And then she talked about us. She referred to a conversation we had had recently on the lack of lactation facilities for EM physicians on shift. She shared with her audience that we (us FemInEMs) find it difficult to find reasonable time and accommodations to pump breast-milk. She told the Forbes readers that are few easy, private places to pump in certain hospital settings and that those of us doctors who are also new mothers often feel like we have to choose between our newborns and our jobs. She also highlighted that Freemie, the hands free pumping system, was of course, invented by a FemInEM.

Ultimately the article showed that the color of your collar is irrelevant, we need better policies supporting women across the board. Which proves again, we are all in this together.