Workplace Violence: It is NEVER Part of the Job.

Between the years of 2011 to 2013, there were approximately 25,000 recorded workplace assaults, with 70-74% of these assaults occurring within the healthcare and social service settings2. In 2014, OSHA published similar data that showed that those in the healthcare and social services sector were 4x more likely to experience WPV than all other occupational industries (see table 1)3. Given these eye-opening statistics, it should come as no surprise then that healthcare workers are more likely to be assaulted than security guards or police officers4. 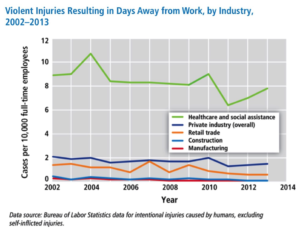 Among the specific sectors within the healthcare industry, the ED is considered a very high risk setting for WPV, especially given its “frontline” nature. Specific factors that make the ED more susceptible to WPV include, but are not limited to, long wait times to see a physician or receive pain medications, belligerent and intoxicated patients, patients with drug-seeking behaviors, and psychiatric patients suffering from acute psychosis needing immediate treatment5.

When looking at the frequency of WPV, one national study found that 78% of Emergency Medicine (EM) residents and attending physicians reported at least one episode of verbal or physical aggression within the past year and 21% reported more than one episode6. Another study involving only EM physicians from Michigan reported that one quarter of the physicians were the victims of physical assault in the past year. Of that same study, 44% of the physicians stated that they felt less safe while working in the ED than years prior7.

Even more startling is the frequency that nursing staff are victims of WPV. Gacki-Smith et. al reported that 25% of nurses were victims of physical violence more than 20 times in the past 3 years8. In another study, 82% of emergency nurses reported being physically assaulted at least once and 100% subject to verbal abuse in the preceding year. With these statistics, it should come as no surprise that the same study showed that ED nurses experienced the highest rates of WPV among nurses of other specialties9.

Sadly, these acts of violence are often not reported to law enforcement authorities or hospital personnel9,10,11,12. Consequently, these statistics likely underrepresent the actual frequency of violent acts within the ED. Several studies have attempted to cite the reasons for underreporting. Most commonly, it is found that ED staff underreport incidents secondary to lack of institutional reporting policies and the perception that being a victim of assault is “part of the job” 9,10,11. Another study suggested that nurses underreported due to the fear of retaliation and lack of support from hospital administration8.

The long-term consequences of frequent WPV can take its toll on ED staff. One survey of Emergency Medicine physicians found that 81% of physicians were occasionally fearful of WPV. Of this 81%, 16% considered leaving their hospital and 1% actually left their place of work due to WPV7. Recently, it was shown that acute stress from WPV has a statistically significant effect on reduced productivity, particularly with regards to the worker’s ability to handle and manage their workload12. Several studies have showed that ED nurses attribute WPV as large factor contributing to professional burnout11,13. On top of all these negative factors, being a victim of WPV can lead to significant financial losses for both the employee and employer14.

Now, most of the information obtained above was from the scribbles of notes I had taken during the difficult time that followed my assault. Despite my research, I had no intention of taking any steps to remedy the situation. It was not until I had casually mentioned my frustrations to a mentor that it was suggested I devote my negative energy to fixing the problem rather than stewing on the unchangeable past.

The rest is history. I decided my research project would focus on three main objectives. My first objective is to look at the prevalence of WPV among resident, fellow, and attending physicians within US Emergency Departments. Although this has been looked at many times in the past, those studies were limited to a smaller sample size and had gaps in their geographical distribution6,7. Additionally, although several studies have established the long term psychological effects WPV has on nurses, very few have focused on residents and attending physicians. This would be the basis of my second objective. Lastly, to my knowledge, this would be the first survey in the US assessing how the actions ultimately pursued by the respondent and their employer impact the victim’s overall workplace satisfaction.

The study methodology is simple. It is a retrospective, cross-sectional survey that was originally only going to be sent through CORD’s (Council of Emergency Medicine Residency Directors) website, but after a little publicity, the survey was also sent through various online groups and websites. The study was limited to resident, fellow, and attending physicians, and these physicians had to be practicing for at least 12 months to fill out the survey. Of course, such a simple survey has its limitations, such as its susceptibility to recall bias given data is being retrospectively collected and its susceptibility to response bias, as those who have been victims of WPV will be more likely to fill out the survey. However, I was lucky enough to receive a grant where I was able to allot $1000 to gift cards in an attempt to incentivize those physicians who have not been a victim of WPV to fill out the survey.

Overall, I anticipate this study’s findings will not be jaw-dropping or out of left field. I anticipate it will show there’s a high prevalence of WPV among physicians, that those affected by WPV will have some component of psychological distress, and that the actions taken to investigate the attack will have a direct influence on workplace satisfaction. More important than the results of my study though is getting people to talk about WPV and acknowledge that there is a wrong and pervasive culture of its acceptance in healthcare. I am not angry at anyone in particular after what happened to me. We all are just a byproduct of this culture. In fact, had I not been assaulted, I likely would still be completely oblivious to the problem at hand. Nevertheless, if there’s one thing I’ve learned through this experience is that WPV is never a part of the job.

Hello Dr. Simonson, I just did a grant with NJACEP on Violence in Emergency Departments and agree that this culture of acceptance has to change. My survey found 80% of ED staff felt this way. Your research is one way to start the cultural change of WPV. I would love to keep in touch with you during this process.