We’ve all had this experience before: You go to a new restaurant where the service is amazing, the ambiance is great, and the food, omg the food. You can’t wait to tell your friends about this restaurant, and in addition, you log on to the internet to leave a positive review. Conversely, we’ve all experienced the opposite. Maybe it took thirty minutes to get any service, the food was bland, or everybody in the party got food poisoning later that night. Just like some restaurants deserves their stellar reviews, some restaurants earn their bad ones. This story is about a doctor who left a bad yelp review, and the unexpected fallout from her experience.

Dr. Woods* is a food enthusiast who made a hobby out of trying new restaurants in her city. When she had a bad experience at a new restaurant, she consequently left a bad yelp review and moved onward to further food adventures. A few months later, Dr. Woods googled her name after a medical student let her know that something was amiss, and what she found shocked her. Her physician rating scores were disproportionately low compared to her peers at an average of 2/5 stars, compared to 4-5/5 stars previously. When she contacted the websites, RateMDs.com reset her rating, but her online harasser replaced the negative ratings. Vitals.com and HealthGrades.com refused to remove the false reviews. She also found a Google+ profile that was created in order to defame and harass her. The perpetrator posted photos of Dr. Woods, linking her practice location to derogatory comments. When she contacted Google regarding the profile, they did not pursue corrective measures to remove the profile. Dr. Woods was able to discover the perpetrator of her online harassment when she found a blog post that was written by the owner of the restaurant for which she wrote the bad review. He was able to discover her identity because Yelp.com displays the first name and last initial of their users, and he used this information to retaliate for Dr. Woods’ negative review by starting an online attack against Dr. Woods. She removed her Yelp.com profile, which also removed her reviews, but his continued online harassment lasted months. 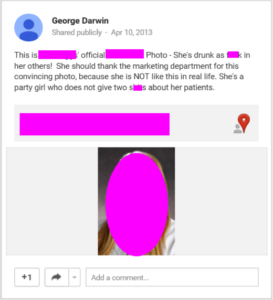 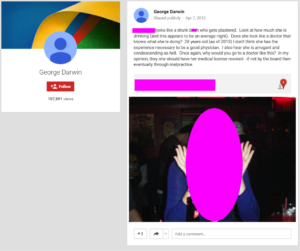 It has been several years since Dr. Woods was the subject of this attack, but the evidence still remains. Her physician rating remains uncharacteristically low, and since patients are increasingly using physician rating websites to choose their provider1, her low rating damages her practice. The first few Google search images associated with her name link back to the defamatory Google+ page, which has yet to be removed despite its obvious intent. For a physician facing online harassment, there are online reputation management options, such as Reputation.com, which can help mitigate the fallout. A Reputation.com representative reported that it takes an average of 6-12 months to successfully manage online reputation attacks at a cost of $300/month, or $3000/year. The length of time that it takes to complete management varies on a case-by-case basis.

Earlier this year, media outlets were reporting on a recently published study in which 30% of female physicians reported sexual harassment from their peers and supervisors2. However, a study published in NEJM in 1993 reported that more than 75% of female physicians suffered from sexual harassment by their patients3The unfortunate lesson from this story is that the increasingly growing power of social media combined with a public internet identity remains a place of vulnerability for physicians.