The following post is a transcript of my talk at #FIX18 in New York.

I remember joining twitter very clearly. It was July 2012, and I was diving into the unknown – it felt like the start of a new relationship. There was that excitement about what might be, the feeling of potential – the idea that we might be great together.

Then there was a honeymoon phase as I fell deeply in love with Twitter; it made me feel good about myself – empowered, useful within the online medical community.

Like all new relationships, I saw some cracks but I chose to overlook them, telling myself they didn’t matter – that what we had was enough to overcome the bad stuff. I was old enough to know what I need from Twitter and it was this: to be able to develop my knowledge, my identity and my practice as a doctor. I shared things I found useful and explored things I didn’t understand, and I felt as though Twitter and I made each other better. I fell in love with this community of passionate medical professionals and I knew they would support and listen to me.

But I was wrong.

I made a mistake. I thought if I shared something with Twitter that I had begun to feel strongly about, I would be able to explore that too and to find support for my viewpoint. That was my first error – I expected affirmation.

My second error was naïveté. I was going to call out something that healthcare professionals do without thinking about it, and I expected them to be open and curious enough to want to change.

This is what I shared.

I’m going to explain to you the four reasons I don’t think we should be using the word “sexy” in clinical medicine.

My first issue is the meaning of the word – literally carrying imagery around arousal that I’m uncomfortable associating with my workplace and clinical duties. Google the definition of sexy and you’ll find this: 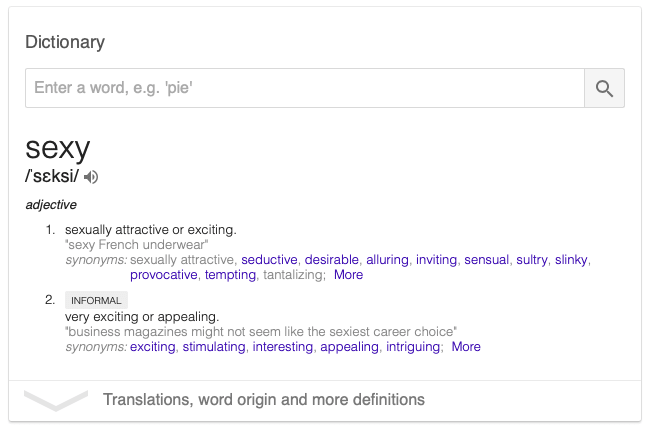 Sure, “very exciting or appealing” is there as a secondary, informal meaning – but that’s the key, it’s informal. This is a workplace. We are professionals.

Sexualisation of women in the workplace

The Truth About Nursing blog has an excellent post exploring this issue, signposting to an article in the Age from 20061which found nurses were the top male sexual fantasy job, with 54% of surveyed UK men having sexual fantasies about nurses. There are implications for the way nurses are treated when they are portrayed in the media as objects of sexual desire. The blog commits to confronting and rejecting this stereotype, and I believe we should too.

But it’s a compliment!

But “sexy” is a compliment – right?

I, like many women, have heard the word “sexy” used in ways that make me feel uncomfortable and I don’t think we should perpetuate this.

A study from Turkey2 found 37.1% of nurses had been sexually harassed, with physicians as the primary instigators. More than 75% of female doctors surveyed for a paper in Canada published in 19933 reported sexual harassment by patients, with the average reported frequency highest for those working in the Emergency Department or a community health centre. And a third paper from the Netherlands4, published in 2008, found one in 3-5 female medical students had received unwelcome sexual attention from patients, colleagues or supervisors.

To many of us, worldwide, sexy is not a compliment – it is a threat.

Finally, the most common use I’ve seen on medical twitter is as an adjective to describe some of the more adrenaline-fuelled procedures we perform. I struggle to find the words to explain the sinister implication of the most invasive procedures we perform on our most vulnerable patients being “sexy” when there are so many other words we could use to articulate the cognitive complexity, urgency and critical nature of our work without reducing it to one of Homo sapiens’ most basic instincts.

And I’d challenge you to pause for a moment to consider how patients and their families might feel if they knew we referred to their thoracotomy as “sexy”.

But of course, Twitter is not the place for nuance. That was more than 400 words that I had tried to capture in just 19. So what happened?

Well, I received my affirmation: many women heartily agreed, even without the lengthy explanation I’ve given you. Something resonates here – it’s not just me.

Four men suggested that I was wrong because they were sexy – they aren’t getting any more airtime from me.

Some men seemed to want to know more but when I elaborated the discourse seemed to end; leading me to wonder how rhetorical their questions really were.

Some men were more reflective and thoughtfully agreed this was something they had overlooked. I take great encouragement from this proof that there are curious and open-minded professionals among us.

Some men straight-up disagreed with me – I left the apology at the end exactly as it was written so that you can judge the sincerity for yourself.

And I found some allies:

My third error in sending this thought into the social media ether was to have been surprised. I shouldn’t have been. I had spent time marinating the feelings and thoughts behind those 19 words and I thought that other users would immediately buy into my carefully constructed mindset without me explaining it.

But Twitter is a microcosm of the world we live in, and the responses simply reflect the battle we are facing and that the cultural issues in medicine, particularly around gender roles and feminism, are exactly the same as those outside it. We – women – must be calm, controlled, unemotional, unambiguous at all times. I’ll leave you to consider how balanced that expectation is.

Talking about this at #FIX18 felt like preaching to the converted; if audience members hadn’t thought about the word sexy before I’m pretty sure that their presence at #FIX18 was an excellent predictor of their agreement with the points I was making. But I wanted to share something else this experience taught me, something many women before me have learned in similar circumstances.

I got the affirmation I was looking for, from a number of women and men, healthcare professionals and not. But healthcare professionals are not all like me or like us; the community’s strength and its weakness is that we are all different. My love affair with Twitter is over, but I don’t see it as an enemy either. It’s that ex I spend a more controlled amount of time with, but with a sense of wariness. My notifications are off; we spend time together on my terms.

And most importantly I realised that we can’t assume that people are ready – or willing – to listen when we talk, particularly around gender-specific and gender-related issues. Shouting down dissenters doesn’t seem to help. We need to trigger curiosity. Quiet, polite, respectful engagement is hard, but it seems to be the way forward. We can change hearts and minds this way.

Maybe sexy IS just a word…

But there are SO MANY other words for what we do! We are blessed with the beauty of the English language.

And, like it or not, the words we use matter.

Words have power. With power comes responsibility; we must use words wisely. I can’t help but feel that for the word “sexy” in clinical medicine – #TimesUp.

Check out this and other pieces of Dr. May’s work at the St. Emlyn’s blog.