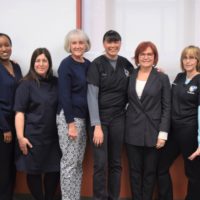 Congratulations to the Yale Department of Emergency Medicine (DEM) for earning the AWAEM Outstanding Department Award.

This award goes to the Emergency Medicine Department that has shown support of women in academic EM through organizational initiatives that address the recruitment, development and advancement of its women physicians, promoting gender equality, diversity, opportunity and inclusion.

DEM has a national reputation for its outstanding track record in recruiting, mentoring, and supporting women, clinically and academically, as well as supporting research focused on improving health of women and increasing gender equity.

Currently, 40% of DEM faculty are women and approximately half of the academic and clinical leadership roles are held by women. This past year 40% of faculty promotions were women. Six female faculty members are funded by major grants, two have held K training awards, and one has a Yale University faculty diversity award. The department’s ardent support for women faculty is also reflected in their consistent history of receiving national honors and coveted Yale School of Medicine commencement awards, including the Alvin R. Feinstein Award for outstanding teacher of clinical skills; the Charles W. Bohmfalk Prize for teaching in clinical sciences; the Leah Lowenstein Award for excellence in promotion of humane and egalitarian education, and the Leonard Tow Humanism in Medicine Award. Additionally, DEM Chair, Dr. Gail D’Onofrio received the Advancement of Women in Academic Emergency Medicine Award in 2016.

“From my first day as an intern, to my role now as Assistant Professor, I have recognized how incredibly fortunate I am to work in a department that has such unwavering support for women, both on a professional and personal level,” says Dr. Kathryn Hawk. “The department has been an amazing resource, helping me balance being a mother of young children with establishing myself as an independent clinician-researcher. I am especially grateful for the ongoing support and inspiration I receive from Dr. D’Onofrio, as Principal Investigator of the NIDA K12 program and as a mentor and research collaborator.”