Sponsored: How A Medical Mission Changed My Practice 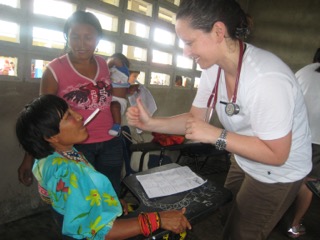 Deep in the jungle in the Darien Province of Panama, I was struck by just how lucky I was to be working in the medical profession. Often life in the emergency department is so hectic and draining that it’s easy to forget what made me become a physician assistant (PA). But sitting with a Ticuna Indian woman who had walked three days for the promise of a medical miracle, I was reminded that I’d made the right choice.

We traveled in April, driving hours along windy roads on a bus to get to this remote area southeast of Panama City, just near the Columbian border. There were bats and mosquitos, and we all hoped we wouldn’t get Dengue fever. It was certainly a risk. It was sweltering, with no escape and no relief. It turns out we were the relief. In the end, the heat was the least of what we remembered.

I was in Panama as part of a medical mission sponsored by Global Brigades, a group that serves people without access to good medical care in multiple Central American countries and Ghana. There were about 26 of us in total: ten physician assistants and twelve nurse practitioners from the San Francisco Bay Area who had raised funds to cover our travel costs and medical supplies. Several in-country administrative staff had joined us, as well as one Panamanian dentist, whose gift to the clinic was two days of tooth extractions.

Hearing we were coming, indigenous people from the surrounding jungle had walked three to four days to get medical support, bringing with them their families, their stories and, of course, their illnesses. We took over a village school for four days and stayed in a bunkhouse a few miles away. We sat up organizing medications and dental kits each night and then treated patients all day.

One woman, in particular, stands out in my memory.  She was only in her mid-20s and complained of lower abdominal pain and bloating that had been worsening for three to four months. I dug into her history. She said she had a preliminary diagnosis of uterine cancer, but didn’t have the financial means or ability to travel to get treatment. She appeared so calm and at peace with what was to come.

Our clinic was simple. We had only basic treatments: antibiotics, antifungals, anthelmintic, and permethrin. We didn’t have the equipment or medications to handle the complexity of her case. So we offered her what we could—basic pain medication and our ability to listen to her questions and explain her condition. And for that, she thanked us. She told us that she just loved sitting with us and speaking with us. And that meant more to her than anything else we could have done.

As doctors and advanced providers, we don’t always have a cure. But we can always provide care. Human touch, compassion, and education mean so much to someone who needs help coping with the uncertainty and fear their illness creates.

I have talked with many medical professionals who have traveled on similar missions and returned to the United States with a similar feeling of renewal and joy for practicing medicine. They come back reminded that being a provider is about more than drugs, technology, and paperwork. It’s about the ability to show our patients we care.

At CEP America, where I am an emergency medicine physician assistant in Orange County, our mission is to create a culture of care. Recognizing that job dissatisfaction is at an all-time high for healthcare providers, CEP has launched an initiative called Joy in Medicine that encompasses wellness, leadership development, coaching for engagement and empathy, and team building.

Based on my experience in the Panamanian jungle, I can’t think of a better way to bring satisfaction back into your practice than going on a medical mission. I know that the experience was as rewarding for me us as it was for those I treated. Fortunately, CEP’s flexible scheduling and sabbatical program makes it possible for other physicians and advanced providers to get out of the ED and re-focus their skills on caring versus coping.  I recommend all providers who are questioning their careers to consider taking this kind of break.