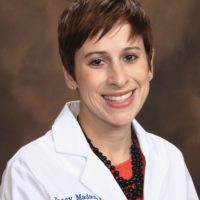 Congratulations to Dr. Tracy Madsen for receiving the 2017 AWAEM Early Career Award. This award is given to honor early career female faculty who have shown promise for significant career achievements in emergency medicine through research, education, service, advocacy, or administration, and/or who have worked to promote the role of women in academic emergency medicine.

Dr. Madsen is an Assistant Professor in the Division of Sex and Gender within the Department of Emergency Medicine at the Warren Alpert Medical School of Brown University.  Dr. Madsen completed both her undergraduate and medical degrees at Boston University before going to Providence to complete a residency in Emergency Medicine.  Following her residency, Dr. Madsen completed a 2-year research fellowship with a focus on sex and gender differences in acute aspects of diseases and earned a Master’s degree in Clinical and Translational Research.