Today we highlight Dr. Laurie Mazurik MD FRCPC MBA . She has over 20 years experience as a Critical Care Transport and Emergency Physician at Sunnybrook Health Science and Faculty of Medicine at University of Toronto, Canada. She conducts disaster exercises to inspire inter-professional teams to find solutions to health care shortages. She is currently working with Department of Foreign Affairs and International Trade Development, to lead a team in the Middle East to develop Medical Guidelines to combat the threats of terrorism. She has served as a consultant for the Ontario Ministry of Health, Public Health Agency of Canada and World Health Organization.

She’s happily married to Graeme Ross and they have a son, Aleksander, who wants to be an entrepreneur. 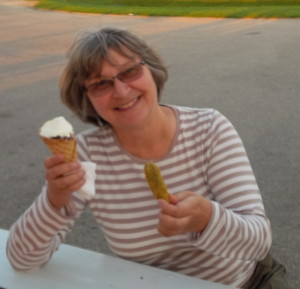 What is your leadership style?

Well it has evolved over the years. I was always what some might consider a rebel.

In grades 5-8, I liked to hang around with the “bad kids”. To me they seemed more adventurous, willing to take risks and challenge authority. It was exciting, and fun. Then I noticed they were on a track to jail!

So I took up sports. I was competitive and worked hard to be the best. If you succeed this way…you don’t really have followers and your success is fleeting.

Then, in second year medical school, my mother was diagnosed with metastatic breast cancer. It was the worst and best 3 years of my life. As she went through her disease, I dropped out of medical school to go on the journey with her.

During that time we examined everything about life, the most important being purpose.

With that came perspective, of how it just can’t be about your life alone. It had to fit into a bigger plan, and your role, was to simply find a way to make it better for someone else.

From then on, I didn’t really think about leadership as being a person but rather the “better idea”. My mission became finding those “better ideas” that would inspire others to action. The reward is seeing a group of strangers form a team around an idea capable of causing significant positive change. It’s exhilarating. I like to facilitate that.

Where, I have been most successful as a leader, is in situations of crises, crises simulations or any massive project. People like challenge, and I give them the opportunity to go beyond the limits they often set for themselves.

Remember though, the “hook” is always in the idea.

You’d be surprised, how many people say yes and off we go.

Who is your Leadership Hero and Why?

Probably going to sound boring, but without a doubt my heroes are my parents. They gave me a value system I believe in.

My father escaped Poland pre-WWII. Before leaving, he spent 18 months in prison, for refusing to take up arms. His military captors said if the generals had his resolve, there wouldn’t be a war. He had dreams of being a doctor, but coming to Canada, robbed him of that opportunity. Instead, he became one of the smartest shoemakers, I know.

Fluent in 5 languages, he often studied medical books (including Gray’s Anatomy) in Russian. He lost his entire family in WWII, and this haunted him throughout his life. We (my 2 brothers, sister and mom) were everything to him. Knowing him impressed upon me the importance of family and the personal conviction that war can never solve anything.

My mother was born in Canada, to Ukrainian Immigrants. She wanted to be an entrepreneur at a time when women settled for being housewives. She ran the business of our home, instead, looking after boarders and 4 children. She was a free thinker, always challenging “stayed” ideas. We talked about God. “Religion is not rituals, bricks and mortar; it’s how you treat people everyday”. We talked about Love, Life and Purpose and how at the end of it all, you want to know you made a difference. She taught me that “true power is an idea” that others can use to make positive changes in the world.

Yes, my parents are my heroes.

Have you accrued any insights from which other aspiring female leaders might benefit?

Believe in yourself, and follow your gut instincts. When people tell you can’t do something, and your instincts say you can, take the challenge.

Never have regrets. The road to success is paved with failures. When you understand that, you have what it takes to find the ideas, others will follow.

What a wonderful interview…or story! Laurie, I loved learning more about your family and what gave (gives) your life purpose. Wow!