Editor’s Note: This is the second in a three part series.

How do these gender roles play a part in medicine? First, our specialties in medicine can be characterized as more “agentic” vs “communal”.  For example, communal specialties are ones that involve care of families and children and are not considered highly technical.  These fields are considered lower status, often lower salary, and have a higher percentage of female physicians.  Other more agentic fields, such as orthopedics, neurosurgery and neurology, are perceived as higher status, more technical, and more male-dominated. Medical students likely experience a significant number of subtle messages related to gender bias that influence their career direction to align with gender stereotypes.  Below is a table from Carnes et al.3 depicting the effects of gender roles on specialty. 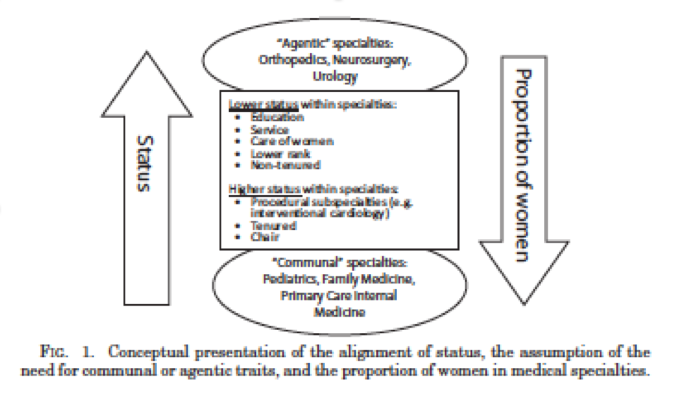 How else does our sex affect us as women in medicine? Remember that “likeability penalty” we talked about. Well, wait until you see your evaluations!  In medical school, my evaluations were great.  I aced my classes while trying not to be a “gunner” along the way.  But as I stepped into the role of a resident, the role of a physician CARING for the patient, the role of needing to get things done to save a life, my evaluations changed.  In fact, they screamed, “You have a vagina!” And not in a good way.  Peers labeled me called bossy, bitchy, and arrogant.  I thought they were my personality flaws, something intrinsically wrong with me and how I was practicing as a physician.  I called my senior, one of the most amazing doctors I know, crying about how mean my evaluations were, how everyone hated me. She promptly pulled up her evaluations and read them aloud to me over the phone.  I stopped crying and started laughing.  They were EXACTLY the same as mine but even meaner.  My faculty evals also showed significant dichotomy.  I was either overly-confident and arrogant, or not confident enough and needed to make swifter decisions with more self-assurance.  I could never sort out how to improve because of mixed messages.  In emergency medicine (EM), a couple of studies were recently done looking at the effects of gender on evaluations.  The first study looked at quantitative feedback using the EM milestones, and found that during their intern year, men and women were considered equally competent, but by graduation, the males attained higher milestones than the females across all subcompetencies, concerning for a gender gap in evaluations5.  The second study looked at the qualitative feedback that the residents received and found that women received less consistent feedback than the males and that feedback often referred to personality traits6.  Males typically received consistent feedback on what they needed to do to improve, while females would get mixed messages, especially regarding autonomy and assertiveness6.  Despite the strides we have made in integrating women into the workplace and the field of medicine, the gender specific traits that allow women to succeed are considered “MALE” and unappealing or “bitchy” when women possess them, as shown in previous gender studies.

Check out Part 3 next week!

I am so glad you are writing these articles and that these studies are out there. Way too late for me; I retired 3 years ago. Nevertheless, it is very validating to realize in retrospect that it wasn’t me, it was “them”. Thank you.